- No mate, it's that way. Look at this map if you don't believe me.

This guy ignored the bronze dude and just kept running. 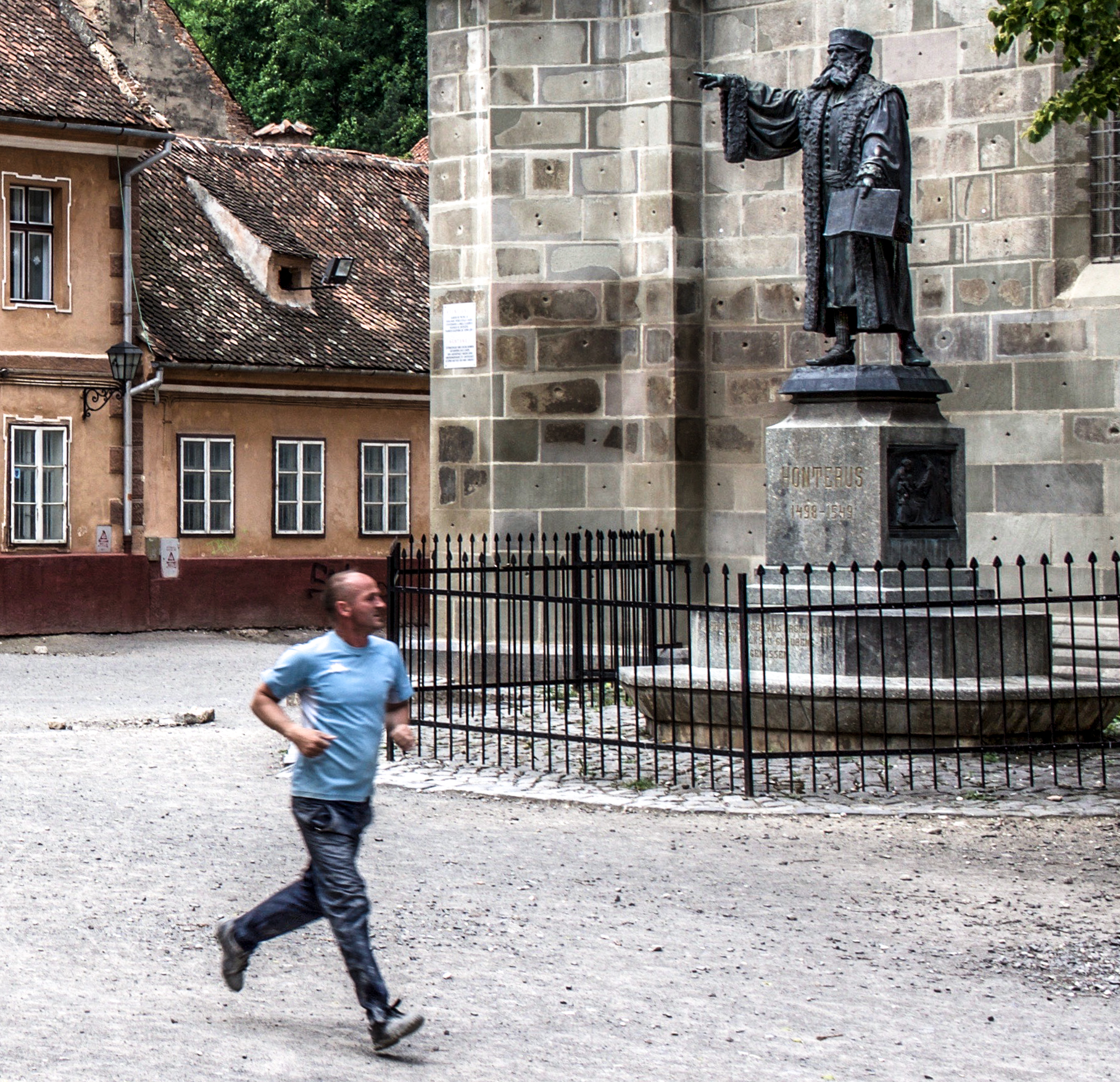 In Brasov, Transylvania, Romania. And the bronze dude is Johannes Honter who is best known for his geographic and cartographic publishing activity (well that and for implementing the Lutheran reform in Transylvania) so he probably knows a thing or two about directions.

We have a fascinating group of volunteers this year again. I enjoy being able to talk to so many youngsters and getting up to speed on what they are up to on their campuses all over the world these days (and because of how our project is structured I can do that without being fired, everyone can).

Most volunteers are great but there are quite a lot of those who are...let's say a tad too passionate for their own good about the issues they don't seem to know very much about. Those are great fun, it is like having say Dwight from "The Office" put on a theatre version of "The Office" just for you.

Most fun from the US comes from the left side of the spectrum. We got just a couple of hilarious MAGA volunteers but they were not nearly as extreme and crazy as those from the left. And the left's ones seem to volunteer much more. I guess most MAGA ones, and especially the really hardcore ones, are busy at home making America great again and cannot volunteer as much as the left does.

I enjoyed it when one of our volunteers opened my eyes on me insisting on no cocks on women I choose to sleep with being transphobic, making many women with penises feel marginalised and eventually being pushed towards "mutilating surgeries" (i.e. gender reassignment / confirmation surgeries). Wow, that is some serious commitment to my cock I have to say. I wish straight cis women ever demonstrated half the commitment to being fucked by me.

This year we have quite a lot of Russians in our first batch and the "fun" there comes from completely different places. One of them is antisemitism. Last year a volunteer from an Arabic country told me that Denmark's horrible islamophobia could among others be clearly evidenced by how most Danes unlike many other countries in Europe strongly opposed, denounced and fought the isolation and deportation of Danish Jewish community by the Nazis and how the famous Danish Resistance was honoured at Yad Vashem collectively. I needed a second for that to sink in obviously. The link to islamohobia was that those Jews we helped save now built Israel and are conducting genocide of Palestinians so Denmark has been islamophobic for a long time obviously. Now, I do think that islamophobia in Denmark exists. I also think that that dude was a crazy antisemite. And for those who missed it, here is my view on Israel vs Palestine (click here).

Anyway, today a Russian dude was telling me how very clear and provable it was that Jews were the perpetrators behind everything bad in this world. After talking to him for 10 minutes it became clear that the "provability" was based on this neat little system he designed for himself and adopted:

- when the Jews (or a Jew) do something bad, then here is your direct evidence that they are horrible. Think "Bernie Madoff stole so much money from so many people, typical really, that's what they do".

- when the Jews are victims of something bad, then "they staged this to become victims, get sympathy from the world (look how the whole world rallies to support them!) and achieve their horrible goals". Holocaust fits nicely here, which the Jews apparently staged to ensure that nobody objected when they stole the land from the Palestinians.

- when the Jews (or a jew) do something good and smart (think Nobel Prises, Einstein, etc), it just proves their potential destructive power we should all be afraid of. Also, bring up any bad consequences of those good inventions (atomic bomb!).

- when the Jews just mind their own business and live like everyone else then "they are trying to blend in and corrupt the system, etc until they strike again in one of the two ways above".

So, whatever the Jews do, don't do or have done to them is guaranteed to prove that they are evil. An old dirty little trick I have seen before.

I asked him to:

Also, "The Protocols of the Elders of Zion" are one of his favourite sources apparently.

- You do know that "The Protocols" have been proven beyond any doubt to be completely fake and there is literally nobody in the scientific community who would as much as doubt that, right?

- Yes, but it doesn't mean that what is written in them is not true.

Open to: All, detailed results viewable to: All. Participants: 19

What do you think should happen to WikiLeaks and Julian Assange?