In addition to the below horrifying account of what happened to that poor man, another straight white guy I know opened up to me today about the deep trauma he was still trying to overcome after he bought a box of organic gourmet artisan cupcakes (15 bucks a piece) in central Copenhagen and was served by someone who also had an accent and was named Hasan (yes, I confirmed it definitely wasn't Hansen with the first name on his tag just covered by his clothes, it was Hasan).

You really do not know what fear in this world really is about unless you had a leak fixed by a plumber in California or bought a box of cupcakes in Copenhagen. And yet, all this suffering is too often just brushed aside and ignored. I was going to grab a coffee in the coffee shop just around the corner later tonight but now I am terrified that the barista might have an accent different from mine and I might suspect that they might have voted differently from me too. But I will still do it (#heroic). We must be strong. We must not give up. We will not be intimidated. 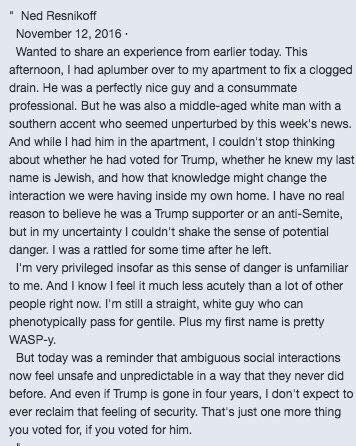